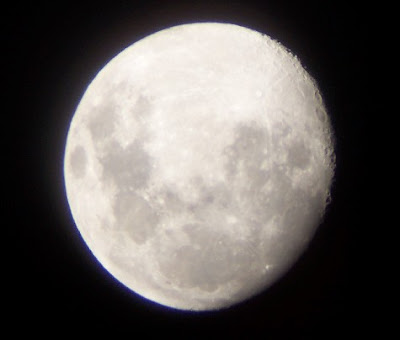 In Lecture 3 of The Joy of Science, Prof. Hazen talks about how Galileo used his telescope to explore the heavens, and was the first to observe the craters of the moon, sunspots, and Jupiter's moons. (In the process upsetting medieval European society by suggesting that the celestial bodies were not "perfect.")

We happened to have on hand a reproduction of Galileo's telescope, the Galileoscope. This inexpensive instrument was designed for student use during the International Year of Astronomy in 2009. Although it claims to have decent lenses, it is very lightweight and doesn't come with a stand, which makes it hard to use. We had never really used it, but this seemed like a good time to try again.

First, we set up the telescope for projecting sunspots on a piece of paper. (NEVER point a telescope at the sun!) Unfortunately, after checking SpaceWeather.com, we found that we had picked a day that the sun really did have no spots! However, we were able to see the disc of the sun. We will have to try this experiment again. 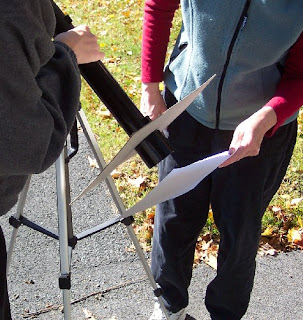 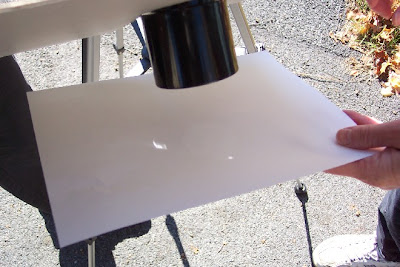 A few weeks later on a particularly cool crisp night, I noticed that Jupiter was clearly visible near the almost-full moon. I set up the Galileoscope on our front lawn. The moon and Jupiter were so bright that they could be observed even with the streetlights shining. I had never seen the moons of Jupiter through a telescope before, but they were clearly visible in the Galileoscope. The four Medici moons were lined up horizontally, three to the left of Jupiter and one to the right. About a month later, with the conditions almost the same, I pulled the telescope out and took another look. This time the line of moons was tilted down towards the left, and there were two moons on either side of Jupiter. 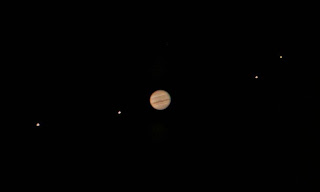 I was unable to take any photos of Jupiter with my little digital camera. (The image above is from Wikipedia.) So instead I pointed the Galileoscope at the moon and took some photos of it. The craters of the moon can be seen along the right edge. To get the photo, I held the set the camera for landscape (so the focus would be infinity) and held the lens a little bit away from the eyepiece. I lined up the image of the moon on the screen and then shot the photo. Pretty nice, right? 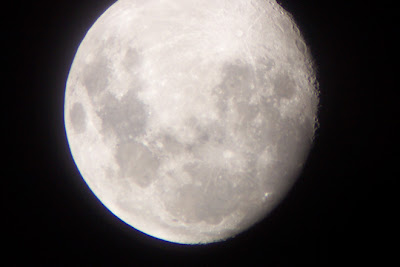 We also watched Bertoldt Brecht's play Galileo, which I have seen performed live. It does a good job of showing the conflict between the scientist and the Church. A good book for younger kids, which we read many years ago is Starry Messenger by Peter Sis. That is the title of a work by Galileo, which was part of a museum exhibit we saw called A Very Liquid Heaven. I was very impressed with the large meteorite (below) which was part of the combination art and science exhibit. 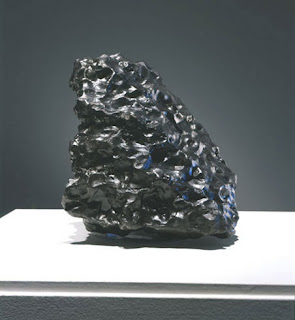