First Law of Thermodynamics: Heating Sand by Shaking It 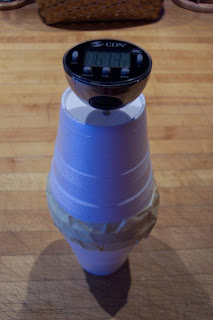 To test this principle, we measured the temperature of sand in a Styrofoam cup.This experiment was suggested by Professor Robert Hazen in his video course The Joy of Science. In his video, he used a jar of sand. However, we decided to use insulated cups so we didn't have to open it to measure the heat. We first measured the sand's temperature, then we sealed the cup, shook it for about five minutes, and measured the sand again. The sand's temperature actually changed from 65 degrees Fahrenheit to 68 in just the five or so minutes we shook it.

2 disposable insulated cups (we used Styrofoam)
masking tape
sand
and a food thermometer (the kind with a sharp metal probe.)