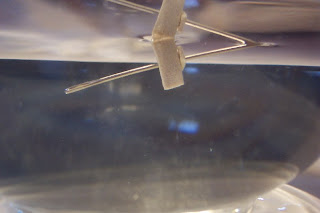 In The Joy of Science, Lesson 11: Magnetism and Static Electricity, Robert Hazen explains that the Earth is itself a giant magnet. In the Northern Hemisphere, the north end of a compass will point down towards the magnetic North Pole. He described an experiment by Robert Norman in his book The Newe Attractive which showed the declination by floating a magnetized needle in a piece of cork in a container of water. By shaving away the cork, Norman got the needle to float below the water's surface so that it's dip toward the Pole could be seen.

We tried to recreate Norman's experiment from Hazen's description using a needle and a straightened paper clip as the magnetic pointers, and real and artificial cork and pieces of a Styrofoam cup as the floatation device.We did get the needle to point on a north-south axis. But it was hard to tell if the needle dipped, because the angle would change depending on where the cork was.

There's another description of Norman's experiment at Practical Physics. And Safe and Simple Electrical Experiments (viewable through Google Books) gives some alternate ways of observing the declination of the needle. You can find the magnetic declination for your position at NOAA's Geophysical Data Center.
Posted by Kathy Ceceri at 8:44 AM