Michio Kaku and Physics of the Future 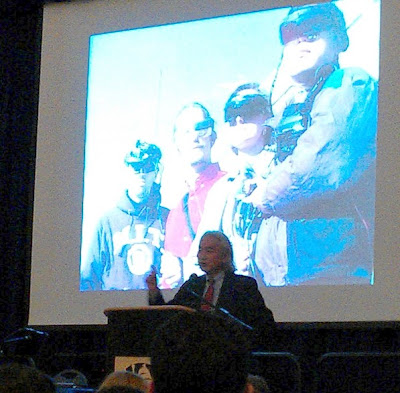 It's been a while, but with my oldest son safely off at college, my 16 year old and I are starting to pick up where we left off in The Joy of Science. The last couple lectures have dealt with the universe, galaxies and black holes. And since the DVD series, while wonderful, is now rather old, I thought we should supplement it with something more recent.

The newest and most highly rated documentary series I could find was How the Universe Works from the Discovery Channel. The writing seems a tad light compared to the PBS series we are used to, but the animations and actual footage are stunning. As a visual learner myself I just rejoice when an animation makes it possible to grasp some concept that would be impossible to picture from a description on a page.

We've only seen two episodes, but both have featured someone I had heard of but never seen before: physicist Michio Kaku, one of the developers of string theory. And it just so happened that the Times Union featured an interview with Kaku in advance of his appearance at UAlbany. I thought it would be fun to run down there and attend the free lecture.

The topic was advanced physics -- mainly nanotechnology, in which UAlbany and the surrounding area are beginning to specialize. Kaku called the area "ground zero" for nano research. Still, even with the TU article, I was surprised to find that the ballroom on the Albany campus was standing room only. I counted more than a 1,000 people in the room. And amazingly, my son and I managed to find seats right up front. 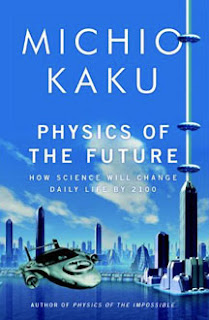 Kaku presented some of the ideas from his new book, Physics of the Future. The lecture was interesting, even if some of the "future" technologies are already here (a phone that will make dinner reservations for you -- I believe it's called Siri) or seem as likely as the jetpack we were all promised back when I was a kid. Underscoring the reality of what "could" be with what probably "will" be was the primitive projection system in the ballroom, which made it hard for Kaku to show a video clip after his Power Point presentation. Looking around the room during the lecture at the rattling curtains and the chandeliers hanging scarily askew -- looking like they hadn't been updated since I went there 35 years ago -- it made me wonder how this country can try to take the lead in technology when our infrastructure is allowed to crumble.

Still, it was a fun jaunt, the lecture was entertaining, and although we decided not to battle the crowds to buy a book and get it autographed, I think I will try to borrow a copy from the library as soon as I get the chance.

My favorite takeaway from the evening came with the last question: Asked what he thought was the most important discovery of the last few years, Kaku pointed out that every science textbook which claims that everything in the universe is made of atoms was wrong. In fact, he said, atoms only account for 4 percent of the universe. The rest is made up of dark matter and dark energy. Sitting there following the discussion, I felt that it was a validation that I made the right choice when I decided that our study of physics would focus on the latest discoveries rather than rehashing Newton's Laws yet again.
Posted by Kathy Ceceri at 9:08 PM No comments: