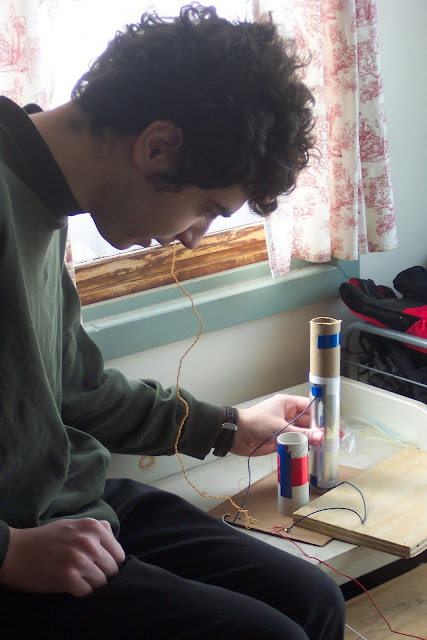 In WWII, ally POWs invented some ingenious devices while imprisoned. One of the most resourceful and impressive of these was something called a crystal radio. Fairly straightforward and simple to make, these devices harnessed local materials using an impressive amount of understanding of scientific principles, and made them into a working radio set. While not always successful, these “foxhole” radios, as they were called, would pick up German and occasionally even British stations if they were carefully made. As impressive as anything else made by the POWs of the day, these foxhole radios are still made by Boy Scouts and hobbyists.

We chose this project to demonstrate electrical currents and radio waves. Our first attempt was met with limited success. However, after several tries, we were able to get a (faint but audible) radio signal. We ended up using a magnetic copper wire stretching over fifty feet as our antenna, which sacrificed historical accuracy, but it was nonetheless successful.

The first design we used was based off of the radio in a Make Magazine video. We were able to pick up static, but the signal was too weak to pick up actual stations. After a day or so of tooling with it, we decided to start from scratch, using the instructions and parts supplied in the Science Wiz Inventions kit. After some modifications to the original design (like adding a fifty-foot antenna) we were able to pick up fairly clear signals. The clearest we were able to pick up (Albany Magic 590 AM) turned out to be coming from a station 25 miles away from us, in Latham, NY.

Some other resources we used:

Here is a video of our radio in action, followed by explanation of its parts:

Parts of the Radio 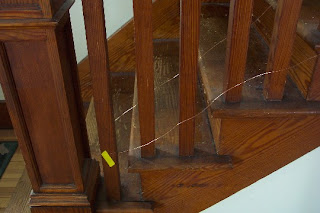 Antenna - 50+ foot wire strand
Our antenna was fairly simple. We bought a length of magnetic copper wire, about fifty feet or so, and hung it around the entire house, starting in the mud room on the first floor and traveling up the stairs to the master bedroom on the second. The longer the antenna is, the clearer its signal seems to be. The antenna serves to convert electromagnetically radiated radio waves into electrical current, making them able to be conducted by the inductor. 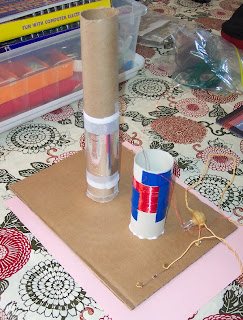 Variable Capacitor - The aluminum foil-covered tubes
Our capacitor was made by taking a long cardboard tube and wrapping smoothed aluminum foil around half of it. We then took a smaller piece of aluminum foil (again smoothed) and wrapped it around a wider piece of paper. Finally, the paper and aluminum foil were wrapped around the half of the cardboard tube covered in aluminum foil. This, once hooked up to the rest of the radio, serves as our variable capacitor, or tuning capacitor. This, when combined with the aforementioned inductor, creates a tuning circuit. The capacitor is designed to store electrical charge. However, it is only possible for charge to be stored in the spot that the aluminum foil wrapped around the paper, called the slider, overlaps with the foil on the tube. Moving the slider up and down can either increase or decrease the amount of charge stored in the capacitor. The capacitor allowed us to change which radio station was being picked up by changing the amount of electrical charge stored in the capacitor.

Diode - The germanium crystal OR "blued" razor blade and safety pin "cat's whisker"
In our different attempts at the radio, we ended up using two different diodes. Our first was a traditional foxhole diode using a razor blade and a “cat’s whisker” made from a safety pin and a sharpened pencil stub. The point of the pin was stuck into the end of the pencil through the exposed graphite (the "lead"). The safety pin was then attached to the base with a thumbtack and partially straightened so that the lead pencil tip touched the razor.


Most directions call for a blade that had been “blued,” or given an oxidized coating to protect it against rust. You are able to blue a blade simply by heating it up in a flame of some sort. We tried a box cutter blade that had spots of rust (oxidation) on it, but couldn't get it to work. Then we built a second radio and used the germanium crystal (see below). After we got that to work, we substituted a razor blade from a scraper that was blued in the flame of our gas stove. Both the blued part and the "white" unheated lip of the razor worked to some extent. The white part produced loud static, but on the blued part we could just barely tune in a station.

For our second design, we used a germanium crystal diode that came in the kit. Both versions of the diode serve to force the signal to only travel forwards, thus converting it from alternating current to direct current. It also serves to filter out anything other than the strongest parts of the signal, called "peaks." This allows us to tune the signal to various stations using the capacitor and to convert the signal into sound. 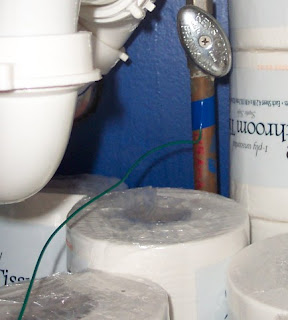 Ground - The cold water pipe
Our ground was fairly simple. In both versions of the radio, we took a wire and attached it to the cold water pipe in our bathroom sink, making sure that the exposed metal wire at the end of the otherwise insulated wire touched the metal pipe. The ground, of course, allows the electrical current to flow through the radio. While exceedingly simple, it is perhaps one of the most important parts of the radio. 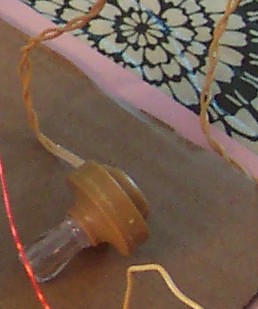 Speaker - piezoelectric earphone
The most important, however, is doubtless the last part, the earphone. The earphone is a fairly basic piezoelectric earpiece, attached to the ground and the capacitor. Inside the earpiece (ours came in the kit, but you should be able to find one in a hobby store) is a copper wire coiled around a magnet. As the current flows through the coiled wire it creates an electromagnet. Also inside the earpiece is a transducer, or diaphragm, with iron embedded inside of it. As the current flows through the coil, it causes the magnet inside to grow stronger or weaker, depending on the peaks of the signal. Its attraction to the diaphragm also grows stronger or weaker. This causes the diaphragm to vibrate in accordance with the signal, producing sound vibrations.

(Thanks to Anthony for researching and writing up this post!)
Posted by Kathy Ceceri at 9:00 AM 1 comment:

We are working on a post about our lab on radio waves that will be ready soon. In the meantime, I wanted to make a note of a website I found when looking for an explanation of Maxwell's Equations (mentioned in the "Joy of Science" lecture on electromagnetic radiation) that we could understand without the math. This explanation comes from a site called Irregular Webcomic, the creation of David Morgan-Mar, an astrophysicist and former science teacher in Australia.


Maxwell's equations are a set of four equations that describe the relations between electricity and magnetism. Written more neatly, they look like this:

To understand the mathematical notation here, you need to know vector calculus. I believe, however, that anyone can understand Maxwell's equations, and why they are so important and amazing, if they're explained clearly enough.

Morgan-Mar even spells out the connection between Maxwell's equations and radio waves:


From this breakthrough have come countless other discoveries about the nature of light, as well as its sibling electromagnetic waves: radio, microwaves, infrared and ultraviolet, x-rays, and gamma rays. All these forms of radiation are made of electric and magnetic fields, moving through space at the speed of light, exactly as described by Maxwell's equations. We now know that radio waves, for example, can be generated by switching an electric current on and off at high speed. The electrons in the wires wiggle back and forth, creating wiggling electric fields, which create magnetic fields, and so on - the overall effect being radio waves. And radio waves in turn wiggle the electrons in your radio or TV antenna, creating electric currents that various electric circuits turn back into sound and pictures.

I enjoyed browsing around Morgan-Mar's site, including his pages celebrating LEGO and Star Trek. I suggest you take a look.

Update: My kids tell me that everyone on the Internet has already heard of Irregular Webcomic except me. Ah well.
Posted by Kathy Ceceri at 5:33 PM 1 comment: