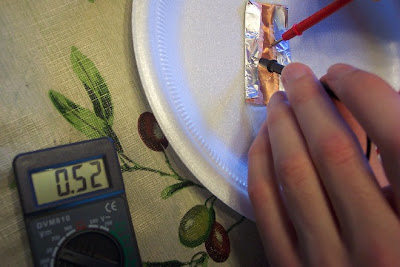 In Lecture 12 of The Joy of Science, Prof. Robert Hazen tells the story of the first electric battery. In 1799, Alessandro Volta was the first person to devise a way to chemically generate electricity without the use of frogs. I decided to try this experiment at home.


We had tried to make a Lemon Battery back when we were doing chemistry. We were not successful. I was all ready to go out and buy a bag of lemons and try again, when I came upon this Tiny Lemon Battery Instructable. The author shows many different ways to create what one commenter dubbed "nano-batteries" using the bare minimum of materials and only a few drops of lemon juice. Since I had a bottle of lemon juice in the fridge, and the other materials were easily scrounged from our science and art supplies, we were able to make a few different types of batteries in the course of a morning -- two of which actually worked! 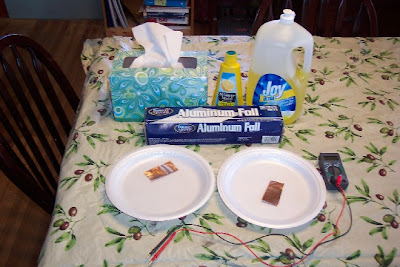 The Instructables page has directions for several variations, which include making several batteries and attaching them in series to light an LED, and flower and animal "sculptures" which use lemon juice to light up attached LEDs using the same techniques. One variation which we tried but did not (yet) get to work was to make tiny batteries from coils of wire inside lemon juice-filled drinking straws sealed with hot glue. Although the cells we made looked right, we could measure no voltage from them. We'll write an update post when we've got a few more designs to show off!
Posted by Kathy Ceceri at 8:00 AM No comments:

The setup. Left to right: the control, Anthony's experiment (The cup of butter was kept in wet sand,) and John's experiment, (The butter was put in a bowl of water, and covered by a ceramic pot and a cloth.)
After watching The Joy of Science lecture about the Second Law of Thermodynamics, I decided to spend a week focusing on entropy. Entropy is a concept that has always interested me, although I don't understand very well. I first read about it in a short story by Thomas Pynchon, and then ran into it again when I saw Tom Stoppard's play Arcadia. But despite its interest for writers, it doesn't seem to have inspired a lot of popular science videos we could watch. The only mention I could find in the archives of what is now my favorite science show, NOVA, was a show about Absolute Zero. Luckily, this topic proved to be interesting in its own right.
The Teachers Guide for NOVA programs often contain good hands-on science activities. In this case, however, I thought the activity -- using a thermometer to calibrate a homemade thermometer -- was a tad lame. But a mention in the show about the discovery that evaporating chemicals could be used to produce refrigeration did catch my attention. I started Googling for safe classroom-type activities the kids and I could do to recreate the 1823 experiment by Michael Faraday, but perhaps without the potentially explosive chlorine.

And then it occurred to me that I could use the concept of a Butter Keeper -- a porous terracotta holder that keeps butter cool through water evaporation -- to achieve the same purpose. (Ironically, the type of Butter Keeper which inspired this activity actually keeps the butter cool by sealing out air, not by cooling it!)

We looked at some different types of evaporative coolers, including a similar metallic evaporative cooler invented by a student when she was in high school. We then gathered some materials and tried making our own. Although we did get some cooling, the Butter Keeper works is most effective in hot, dry climates. Here are the directions for our experiments:

John built one using a cloth to wick up water from a dish holding the terracotta pot. This design was apparently used in Great Britain and Australia in the 20th century.