Last week we watched an episode of  The Joy of Science dealing with elements that have an affinity for one another, like sodium and chlorine.  In the great Theo Gray book Mad Science, he shows that combining sodium and chlorine to make your own salt results in quite a bang.I was looking for other interesting sodium-related YouTube videos when we came across one that showed a cool way to split salt into its component elements.

Above you can see our version of the experiment. What we did is explained below. 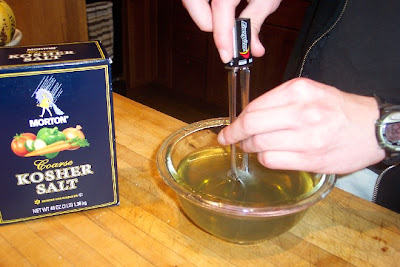 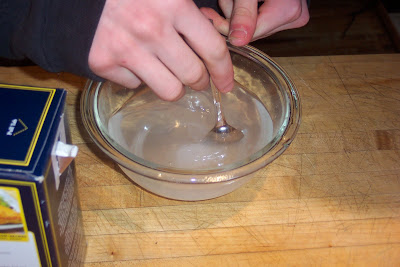 1. Fill the bowl with warm tap water, and stir in a spoonful or so of the salt.

3. Hold the ends of the two spoons to the battery connectors, one spoon on each connector. 4. Within a few seconds, you should see tiny bubbles coming off of the spoons. You will also notice what looks like smoke coming off the water.

5. After holding them in a minute or so, you should be able to see the water begin to turn murky yellow.

6. After several minutes, the water starts to turn dark green. 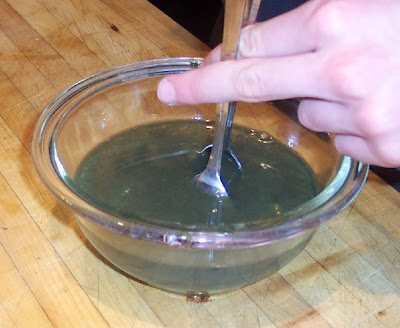 Here is an explanation of what's happening (from the NASA Aquarius website):

In chemistry, electrolysis is a method of separating bonded elements and compounds by passing an electric current through them. An ionic compound, in this case salt, is dissolved with an appropriate solvent, such as water, so that its ions are available in the liquid. An electrical current is applied between a pair of inert electrodes immersed in the liquid. The negatively charged electrode is called the cathode, and the positively charged one the anode. Each electrode attracts ions which are of the opposite charge. Therefore, positively charged ions (called cations) move towards the cathode, while negatively charged ions (termed anions) move toward the anode. The energy required to separate the ions, and cause them to gather at the respective electrodes, is provided by an electrical power supply. At the probes, electrons are absorbed or released by the ions, forming a collection of the desired element or compound.

One important use of electrolysis is to produce hydrogen. The reaction that occurs is 2H2O(aq) → 2H2(g) + O2(g). This has been suggested as a way of shifting society towards using hydrogen as an energy carrier for powering electric motors and internal combustion engines. Electrolysis of water can be achieved in a simple hands-on project, where electricity from a battery is passed through a cup of water (in practice a saltwater solution or other electrolyte will need to be used otherwise no result will be observed). Electrolysis of an aqueous solution of table salt (NaCl, or sodium chloride) produces aqueous sodium hydroxide and chlorine, although usually only in minute amounts. NaCl(aq) can be reliably electrolysed to produce hydrogen. Hydrogen gas will be seen to bubble up at the cathode, and chlorine gas will bubble at the anode.

According toWikipedia, this is the formula for the chemical reaction taking place:

That means, two sodium chloride molecules (which is the salt) plus two dihydrogen monoxide molecules (also known as water) becomes one chlorine molecule, one hydrogen molecule, and two molecules of sodium hydroxide (which is also known as lye). So in our experiment, the bubbles were hydrogen, the "smoke" coming off the water was chlorine gas, and the yellow color of the water was the sodium, in the form of lye.
Posted by Kathy Ceceri at 2:21 PM