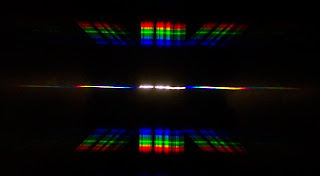 In our most recent episode of The Joy of Science, Dr. Hazen describes observing energy levels of electrons and atoms using a Spectroscope. So, for science this week, we decided to make a Spectroscope out of a cereal box and diffraction grating glasses. We used it to look at different light sources.

Spectroscopy is the study of light-matter intersections. By using a spectroscope, scientists make a record of the light intensity over a range of wavelengths. Each element produces its own spectrum, and many new elements were discovered by this method. Astronomers use spectroscopy to figure out the composition of stars and whether they are moving towards or away from the earth.

The way spectroscopes work is by breaking light up into its different wavelengths. The light can be viewed through a filter (as we did in this version) or reflected off an object's surface (as we did in a version we made a few years ago; see below).

For our diffraction grating, we took a pair of  cardboard holographic glasses and cut them in half. We made two Spectroscopes, so we used one half for each one.

Next we took the cereal box, placed the diffraction grating on top, and outlined it using a sharpie. We made marks to indicate where the actual lens was. Then we opened the flaps and cut a hole the size of the lens in the cereal box.

We then taped the cereal box flaps closed and taped the grating over the opening. 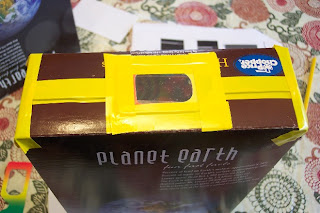 On the opposite side of the box from the grating, we made a mark and cut a very narrow slit. During our first attempt at the spectroscope, we made the slit wider than recommended. We fixed this by taping a piece of card stock over the slit and cutting through that. However, a different set of directions suggested using a wider slit, so we also tried taking photos with the original slit as well.

After completing it, we took some photos by holding the camera up to the grating, and pointing the Spectroscope towards a light. The result was the photo shown at the top of this post.


Here is a cropped version of the photo above, showing the bright lines of higher intensity at different wavelengths. Scientists use this kind of spectrum to analyze what elements are present in a light source. Our grating was not as high a resolution as a real Spectroscope, so it was harder to use. Our spectrum is more an approximation.

For more precision, you can try the directions for a homemade high-resolution Spectroscope from Simon Field at SciToys.com. A few years ago, we made his version of a Spectroscope using an old DVD. (It's also in his book, Gonzo Gizmos: Projects & Devices to Channel Your Inner Geek.)

Here's a site with really nice photos taken with a cereal box/CD type spectroscope.
Posted by Kathy Ceceri at 9:35 AM